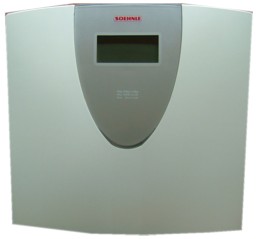 Warning: This application note illustrates a typical strain gage application and is not for actual medical use.

One use of Center of Pressure measurement is in the study of standing posture - Posturography. By measuring the position of the Center of Pressure at regular intervals, a plot called a spaghetti diagram can be generated. By calculating the mean and standard deviation of the center of pressure, an indication of sway is derived1.

In the paper Context Acquisition Based on Load Sensing2, an algorithm is given to measure the center of pressure using four load cells. If the total force exerted at x,y by the load is FL and assuming static forces, the sum of all 4 load cells F1, F2, F3, and F4 is equal to FL as given by eq 1

) commonly uses 4 half bridge strain gages to measure weight. By using these 4 gages, the strain application adaptor and the EMANT300 USB DAQ module, we are able to measure the center of pressure in a low cost way.